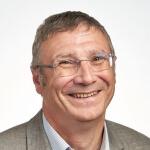 Dr Richard Thornton is the Chief Executive Officer of Natural Hazards Research Australia. He is responsible to the Board for the day-to-day management of the Centre. He has overall responsibility for direction and performance, as well as being the public face of the centre.

Richard is a highly experienced research management executive with over 20 years in the field, previously with the Bushfire CRC and Telstra. He led the development of the Bushfire and Natural Hazards CRC as CEO following the Prime Ministerial announcement in February 2013. Prior to that Richard was Deputy CEO and Research Director of the Bushfire CRC, a role he held since 2004.

Richard has a physics background and has worked in several science fields including nuclear and semiconductor physics, fluid mechanics, IT and telecommunications engineering, and online services, primarily in the private sector.